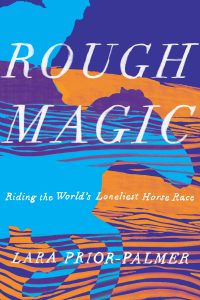 I recently read Rough Magic by Lara Prior-Palmer. The book is the author’s account of her win in the 2013 Mongolia Derby at age 19 in record time. Entering on a whim, she is completely unprepared for the grueling 1000 km race spread out over 12 days. The race is designed after the postal system that existed in the days of Genghis Khan. Riders exchange horses throughout the race at each of the 25 horse-changing stops called urtuus. They would have to follow strict rules such riding only between 7am-8:30pm and not overriding their horses (heart rates are measured at each urtuu by veterinarians). Time penalties were riders must sit out of the race are enforced if either of these rules are broken. Not for the faint of heart, riding is done by GPS on the Mongolian Takhi horses that are best described as semi-wild.

While other competitors take months to prepare, Lara Prior-Palmer is not sure what to expect. In fact, she doesn’t know how exactly she will pay for the entry fee. She orders supplies online in days leading up to the race and even eats her way through her food supply during the very beginning of the race. The only things that seem to go for her is her experience riding horses, general lack of competitiveness, and a little luck. Somehow she manages to hang onto her journal and a copy of The Tempest which probably helped to sustain her the most throughout the race’s 1000 kilometers. While frustrated early by the other competitors’ indifference of her, she finds her focus in wanting to defeat an overconfident, forceful, and showy Texan woman named Devan Horn. Shocked, even immobile as Devan takes possession of a horse that Lara has claimed for a leg of the race, the polite, undemonstrative English teenager finds her resolve. As the race nears its end, Devan is the sure winner but due to overriding she receives a time penalty that gives Lara the win.

Rough Magic is not very long but is an adventurous account of a young woman finding her own self in a place far from home. She is a restless soul that finally breaks free from her “teenage sloth-self.” Her writing is incredible and reads like poetry at times which makes you forget that this is essentially a book about a horse race.

Check it out! Rough Magic