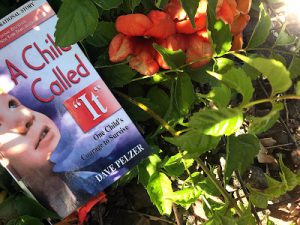 This book follows a young boy who lived through one of the most severe cases of child abuse in California history. Dave was only four years old when he began being brutally beaten and starved by his alcoholic and mentally deranged mother. To survive, he had to learn how to play her wicked games that left him close to death more than once. His mother no longer considered him a boy, but an “it” and no longer a son but a slave. Dave had to sleep on a cot, on a pile of newspaper or in a soaking wet bed and wasn’t allowed food for up to ten whole days. When she did decide to feed him, it was nothing more than scraps and things they wouldn’t feed their dog. David’s mother forced him to wear the same clothes day in and day out to make sure even school wouldn’t be a safe place. Nobody knew Dave’s daily nightmare and with no one to turn to, only his dreams and hopes of one day being loved kept him alive. I remember reading this book when I was much younger and I can assure you that it is much more haunting as an adult. There were many moments when this book made me cringe and cry and sometimes both at the same time. This story makes you sad and uncomfortable which means it is doing it’s job.