Back in February 2017, we asked the Music & Theatre students to vote on which magazine they would like to see in the library.

Thank you for all of you, who took the time to vote for your favorite magazine that you would like to have added to the library collection!!

I was so excited to receive this first issue but I have to admit, I am not a theatre buff, so I brought it to our resident theatre enthusiast and she was so excited to see all of the information in this little magazine! I tried to pretend that I knew who she was talking about when she exclaimed, “Oh and here’s an article about_____, you know she is amazing!” “Ooooo and the Tony Award Nominees, wow, look at who those 2 girls are up against!” “Oh, and a Tony Awards Ballot – you could have your own Tony Awards at home!” 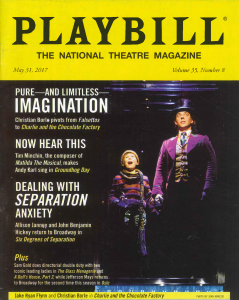 For those of you who might not know what Playbill is, it is “the National Theatre magazine”. Generally, Playbill has interviews with various directors, composers, singers & actors; listings of upcoming Broadway shows; reviews; current shows, where they are & how to get tickets; general articles on the theater; theater performances; backstage topics, and fashion, as well as restaurant ads & sometimes Broadway program inserts.

You will find Playbill on the Current Shelves in the Prescott Campus Library Living Room or in the Back Issues, in between Plateau & Poetry. Or look for it online: Playbill