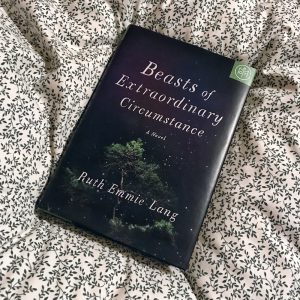 Weylyn Grey wasn’t like other people. Avoiding foster care after his parent’s demise, he escaped into the woods to be raised by wolves. It was when he stopped a tornado on Christmas day that he realized how different he really was. The storm was just the first of many odd events that seemed to follow Weylyn and his pet pig Merlin, from town to town, and at the worst of times. Though his gifts seem to be helpful, they are also dangerous, especially to his love interest Mary, who hadn’t seen him as hazardous since he saved her from a vicious wolf when they were children. Beasts of Extraordinary Circumstance tells the story of Weylyn’s life from the standpoint of the people who knew him. He may not have stayed in their lives for long, but his impact will last a lifetime. Beasts of Extraordinary Circumstance: A Novel by Ruth Emmie Lang was one of the most magnificent works of magical realism I have read in quite some time. I think it was beautifully written and I could not put it down. It evoked many different intense, different emotions that lasted with me throughout the day. This book was just enchanting.